30/40's Irish, Fun/Animated/Characterful
← back to women 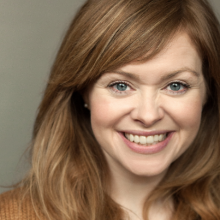 Riona O'Connor is a London based Irish actress, singer and writer.

She mainly writes sketch comedy and is taking over the blogging world with her musings as 'The Unnatural Woman'.

Her wide range of experience includes the voice of Maire Mab Finn for 'Doctor Who: Love and War', playing Maria in the international tour of Shakespeare's 'Twelfth Night' and covering and playing Belle in the number one UK and European Tour of Disney’s 'Beauty and the Beast'. She was last on stage playing Alice in the smash hit musical 'The Commitments' at The Palace Theatre.

For computer games studio I Fight Bears, Riona has written the title track and provided voices for 'Fist of Awesome' and can be heard as Pink Line in the game 'Hard Lines'.  She has recorded albums and workshopped new music and characters with composers such as Matthew Strachan (Who Wants To Be A Millionaire, Next Doors Baby, About Bill) and Michael Bruce (Donmar Warehouse).

Geek Girl A Not Quite Perfect Family Tygrine Cat