20/30's Neutral, Deep/Confident/Distinctive
← back to men 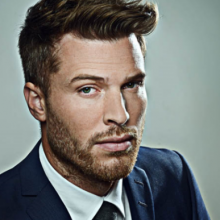 Rick Edwards is a London based broadcaster, journalist and screenwriter.

He began his career on the stand-up circuit after graduating with a degree in Natural Sciences from Cambridge University.

He actively campaigns for youth engagement in politics and voting and, in Summer 2014, delivered a hugely successful TEDx Houses Of Parliament talk offering some solutions to get more young people to vote. His first book, None Of The Above, was subsequently published in March 2015 by Simon & Schuster.

Rick hosts the podcast Science(ish) alongside Dr Michael Brooks which delves into the science behind popular films. The series proved such a hit that the duo were commissioned by Atlantic to write a book of the same name, Science(ish): The Peculiar Science Behind The Movies, which was published in October 2017 and ranked number 1 in the Physics, Cosmology and Humorous Essays Amazon charts for several weeks as well as achieving a position of 21 in the overall book charts. The podcast itself has topped the iTunes Science & Medicine chart.

As a writer his original film Burger Van Champion was commissioned as part of C4’s Coming Up strand in 2013 and was described by the Observer as ‘a remarkable debut’ and by Time Out as ‘funny, touching [and] superbly written’.