30/40's London, Friendly/Experienced/Cheeky
← back to men 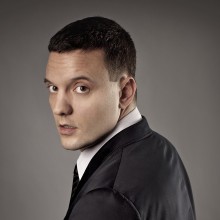 With a portfolio of work spanning two decades, Richard is one of the industry’s most popular and hardest working performers.

His voice is currently being utilised as a commentator on Sky Sports, and previously on the iconic series ‘Late Night Poker’ (Channel 4). It has also proved perfect for primetime documentaries on ITV1 such as “It Shouldn’t Happen To A TV Presenter”. For seven years he was the writer and voice of Living TV and now does the same at History, Discovery Quest and TLC. He performs regular voice-work for the Syfy Channel and has hosted BBC London’s flagship radio breakfast show. His work in radio adverts includes HMV and Dell computers.

Richard’s vast presenting credits include ‘Find A Fortune’ (ITV1), ‘This Morning’ (ITV1), ‘The Live Six Show’ (Sky One) ‘Holiday on a Shoestring’ (BBC1), and ‘The Disney Club’ (ITV1) but he’s perhaps best known for his 3 years on Channel 4’s ground-breaking ‘The Big Breakfast’. He hosts his own gameshows ‘Defectors’ and ‘Quizzical’ (ChallengeTV) and is currently the lead presenter on television’s state-of-the-art interactive channel, Sky Poker. In 2013, his films for The British Council won a coveted award from The Royal Television Society.

Bringing the perfect mix of cheeky chappiness and leading host authority to any project, it’s easy to see why Richard has worked non-stop in the business for 21 years.

This Is Going To Hurt The Art Of Poker