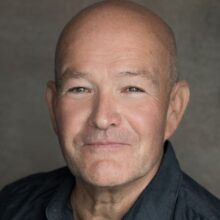 Richard Graham is a London based actor.

He is one of Britain’s best known character actors, appearing in leading and character roles in a huge number of film and TV productions over the last 40 years.

He has appeared in four films nominated for Best Picture at the Oscars; 'Titanic', 'Gangs of New York', 'In The Name of The Father' and 'Phantom Thread', and played leading roles in numerous other movies, such as 'My Beautiful Laundrette', 'Bravo 2 Zero', and the cult football film 'ID'.

Richard has played leading and guest lead roles in well over fifty TV series, ranging from drama to soap to comedy.

His theatre work has included prestigious productions at the Royal Court Theatre, Hampstead Theatre, The Bush Theatre, The Bristol Old Vic and The Royal Exchange Manchester.