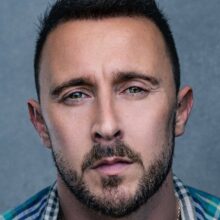 Peter Caulfield is a London based actor and voice over artist.

He was born in Boston (USA), but brought up in Nottingham (East Midlands) England. He trained at the Paul McCartney Drama school (LIPA) in Liverpool and graduated with a 1st BA (Hons) in Acting.

On the small screen, Peter has been an episode lead in 'Doctor Who' (BBC) opposite Matt Lucas. He played Francesco, in the much-anticipated Russell T. Davies drama series, 'Cucumber' (Channel 4), and 'Banana' (E4), which also aired in the US. He can also be seen playing Roy, assistant to The American President (Kim Cattrall) in the International Nordic crime thriller 'MODUS.' He played Jessie in Amazon series ‘Absentia.

Peter is also well known for various West End Theatre performances including the creation of The Lehman Brothers in the West End smash hit; 'Enron', and performed the role of Sam, in the European premier of American play 'Obamaology', which dramatically follows the Obama campaign, in the state of Ohio. Peter also starred as Alfie, in the National Theatre's Broadway and London hit; "One Man 2 Guvnors".

He has also performed alongside Ian Mckellen on the Old Vic stage, and opposite Tom Hardy, Hayley Atwell, and Rory Kinear, on the National Theatre's Olivier stage, in the restoration comedy, 'Man of Mode'. Peter's also an accomplished vocalist: starring as King Herod in the multi award-winning production of "Jesus Christ Superstar" at Regent's Park Open Air theatre, and in a number of Stephen Sondheim productions, including; "Into The Woods" (Royal Opera House), "Follies" and A "Funny Thing Happened on The Way To the Forum" (National Theatre). Peter was most recently cast in the movie ‘Great Yarmouth’ directed by Marco Martins and also sees the release of HBO film documentary ‘The Mystery of D.B.Cooper’.

The Times Review from Audiobook 'Bourneville' by Sebastian Coe...

Narrators Peter Caulfield and Cara Horgan, who take us through the decades between then and now via a series of critical national moments such as the Queen’s coronation, the 1966 World Cup final and the Brexit vote, have a tricky job on their plates: their reading must encompass the downbeat humour with which Coe elaborates daily routines, the suppressed conflicts that arise between the disparate personalities of sprawling families, and the ceaseless but often subtle changes in the social fabric. What impressed me about their performances was a sense of pacing and tonal shift: when, in one scene, a man sits talking to his ageing mother and imagines the emotional havoc her death will wreak on those around her, I found myself moved to tears; shortly afterwards, we are back among the puns and almost pantomime set pieces. Caulfield and Horgan capture beautifully the implicit sadness — and joy — of ordinary life.