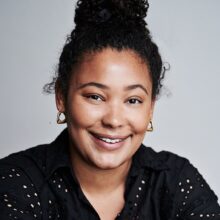 Olivia Forrest is a Cardiff born, London based actress.

Having grown up in Wales, Olivia moved to London to attend drama school. She graduated from East 15 in 2020, straight into the pandemic, and so set her sights on developing her voiceover skills. Extremely versatile, Olivia is able to take you from a clear, fresh Estuary accent, to a soft Southern Welsh, and up to the thick lyrical tones of Merthyr Tydfil.

She has since narrated Nat Luurtsema's 'Opie Jones Talk to Animals', Walburga Appleseed's 'The Princess and the Prick', 'Gothic Tales' by Elizabeth Gaskill, and will soon be heard as multiple lead characters in I.P Daley's/Beano Studios 'The Beano' (Harper Collins).

Earlier this year, Olivia performed in 'Two Into One' (Mill at Sonning Theatre) and was most recently on stage opposite Katherine Parkinson in 'Much Ado About Nothing' (National Theatre).

Our Lives Lose A Stone In 4 Weeks

Visual - Much Ado About Nothing (National)