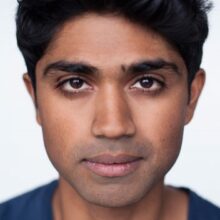 Mikhail Sen is a London based Indian actor.

Born and raised in Bangalore, Delhi and Mumbai, Mikhail is a multi-faceted actor, director and theatre maker. He trained at Drama Centre, London and the Boris Schukin Theatre Institute, Moscow. He has a Tier 1 Exceptional Talent Visa which allows him to work in the UK. He is a fluent Hindi speaker.

Mikhail is passionate about storytelling and works with stroke survivors at Interact Stroke Support UK. Two of his most recently recorded audiobooks have garnered favourable reviews from The Times ... "The producer Ben Carpenter guides the talented Mikhail Sen (star of A Suitable Boy) into bringing out the twists and turns of Chowdhury’s elegantly constructed thriller to the full.” ( 'The Waiter' by Ajay Chowdury)

"This is one of those audiobooks that you can’t stop listening to, a punchy tale of determination, ably narrated by the actor Mikhail Sen, who read Ajay Chowdhury’s Delhi-set murder novel 'The Waiter' so well" ('The Go-Between by Osman Yousefzada)

Visual - The Play That Goes Wrong