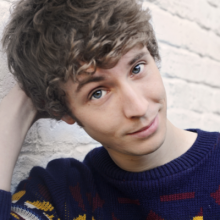 - Matt Edmondson takes the reins as the new presenter of ‘Release the Hounds: Famous and Freaked’

Matt Edmondson is an English radio DJ and Broadcaster.

From an early age, Matt had his eye set on a career in broadcasting. Starting off as a writer for SMTV, he became widely known and sometime infamous, as resident interviewer for Holy Moly TV. Matt’s unique irreverent style was perfectly showcased as the presenter for the weekly online entertainment & music show Pocket TV, which had two successful series.

Matt joined the T4 family in July 2010 and was a regular presenter on the Freshly Squeezed sofa. Other presenting roles have included “The Apprentice: Meet the Candidates” (BBC2), “Children in Need” (BBC1), “The Xtra Factor”, “Release the Hounds”, “Fake Reaction” (all ITV2) and “T4” (Channel 4).

In 2017 Macmillan published Matt’s first book for children “The Greatest Magician in the World”. The sequel is being published in 2019. He has also devised numerous games including the bestselling “Obama Llama”.