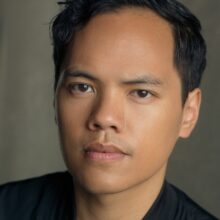 Martin is a London based actor.

Born in Malaysia and a conversational Cantonese speaker, Martin's roots are Portuguese, Chinese and Filipino.

Since graduating from Drama Centre London, he has gone on to star in numerous productions across stage, TV and film.

TV credits include ‘East Mode with Nigel Ng’ on Comedy Central UK and an upcoming season of a popular Netflix series. Gaming credits include a Japanese RPG 'Live A Live' (Nintendo)

He most recently performed in Elton John and Jake Shears new musical 'Tammy Faye' (Almedia Theatre) and is a talented singer.

Martin will next be seen in the feature film ‘Luther’ due to be released on Netflix in March 2023.