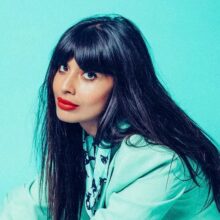 London-born Jameela Jamil burst on to the broadcast scene in 2008 as co-host of Channel 4’s 'Freshly Squeezed' and T4.

She went on to front shows such as 'Koko Pop' and 'Playing It Straight', as well as joining the BBC R1 presenting team. In 2013, she became the first female solo presenter of Radio 1’s 'The Official Chart Show'.

In 2016, Jameela made her move to US television where she was cast by Mike Schur to portray the role of Tahani on NBC’s critically acclaimed and award winning 'The Good Place'.

Jameela is a body-positive activist and advocate for many causes, and in 2018 launched a movement and social media platform @i_Weigh, which encourages women to feel valuable and look beyond the flesh on their bones. The movement has been recognised by both media outlets and the movement’s hundreds of thousands of followers over the world.