30/40's Northern, Believable/Familiar/Soothing
← back to women 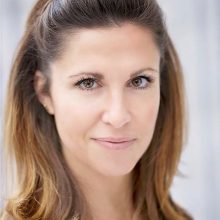 Gema Enseñat is a London based voice-over artist and TV presenter.

Whilst completing her first degree in Spanish and Media, with a distinct ear for accents and mimicry, Gema crafted a career as the 'accents expert' in radio voice-overs; voicing promos and adverts for Galaxy 105, and BBC Radio Leeds.

Following her Masters in Performance Studies in London's Central School of Speech and Drama, she went on to cut her teeth in live broadcast radio as the breakfast presenter on award-winning digital station Capital Disney, whilst also presenting across the network, on stations including Holiday FM, and Century Digital. She also began to craft a career as a presenter, hosting various live TV formats, including red carpet events at Leicester Square for the Capital network, and interviewed a vast array of singers, actors, and celebrities.

From being part of the Sony Award winning presenting team on Capital Disney, Gema used that experience to move into live TV voice work; as a continuity announcer, which she has now been doing for over a decade, on channels including Channel Five, Sky1, and Sky Living.  Gema can currently be heard announcing on Sky Witness.