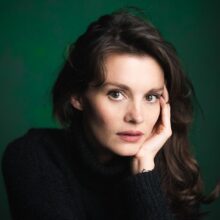 Emily Barber is a London based actor.

Growing up in Peterborough, Emily worked extensively with the National Youth Music Theatre before training in Acting at Royal Welsh College of Music and Drama.

Emily won Best Newcomer at the Manchester Theatre Awards for her stage debut in ‘Billy Liar’ at the Royal Exchange. She also has an Ian Charleson Commendation for her lead role of Imogen in ‘Cymbeline’ at Shakespeare’s Globe.

Her many theatre credits include 'The Importance of Being Earnest' in the West End opposite David Suchet, 'Boys Will be Boys' at the Bush Theatre/Headlong, and most recently in the Pulitzer Prize winning play 'Cost of Living' at the Hampstead Theatre.

Her TV credits include 'The Alienist' sequel - ‘The Angel of Darkness’ (Paramount/TNT) 'Call The Midwife', 'The Royals' and 'Endeavour'.

Secret Life Of The Zoo My Baby Psychosis And Me