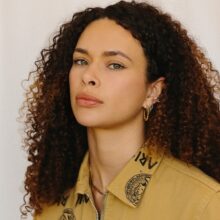 Emerald Rose Lewis is a London based DJ and Broadcaster.

Since her debut on Rinse FM in 2014, Emerald went from starter slots, to hosting her own daily Drivetime broadcast breaking new artists to fans and brands alike to the stations flagship weekly Dance Show in 2022.

Following an interview with M.I.A early in her career, Emerald was asked to help curate & open up for the artists Meltdown Festival at Southbank which subsequently developed into DJing, hosting and backing vocal duties for M.I.A’s live shows globally.

Standing up as an artist in her own right, as well as notable DJ shows at Lobsterfest, The Warehouse Project, Field Day, Fabric and more over the years, she has been regularly invited to speak at and host panel shows including London Podcast Show, ADE Pro, AVA Festival, ‘Women in Business’ & Smirnoff’s ‘Equalising Music’ campaign.

Her interviewing skills have also landed her conversations with The Internet, Slowthai, HAAI, Chase & Status, Black Coffee and more, lauding Emerald as both a respected tastemaker and uniquely positioned and favoured presenter.