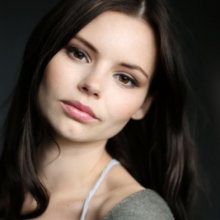 Eline Powell is a London based Belgian actress.

She is best known for her leading role of mermaid Ryn in Freeform series 'Siren'. She can also be seen in 'Game of Thrones', Guy Ritchie's 'King Arthur: Legend of the Sword' and independent feature 'Novitiate'.

The Gypsy Matchmaker The French Revolution