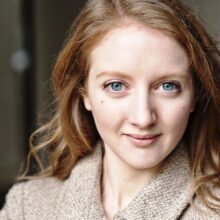 Eleanor Yates is a London based actor.

Originally from Worcester, she studied English at Nottingham University before training at The Bristol Old Vic Theatre School.

Since graduating in 2010, Eleanor has worked in Film, Television and Theatre; from period dramas including Mike Leigh's 'Mr Turner' and 'The Crimson Petal and the White' (BBC) to classical plays and new writing such as 'Versailles' (Donmar Warehouse), 'Pride and Prejudice' (Sheffield Crucible), and 'Closer Scrutiny' (The Orange Tree).

Her most recent roles were in Hugo Blick's 'Black Earth Rising' (BBC2/Netflix) and 'Harlot's' (Hulu).

Eleanor sings with the band 'Oliver Hoare and the Late Great' and has performed at the Royal Albert Hall and Wembley Arena.

The Girl Before Started With A Kiss

Rigs of Our Time