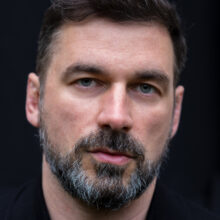 Cristian Solimeno is a London based actor and director.

For 25 years he has held some of the most prestigious voiceover jobs in the UK. He was the first ever Station voice of Radio 1 when they modernised in the 90’s, and has led numerous huge ad campaigns.

His acting career spans film, stage and television. Cristian became well known after playing the villainous team captain in 'Footballers Wives' and has since had leading roles in many feature films, including the adaptation of Martin Amis's cult class novel 'Dead Babies'.

He has also starred in, and played supporting roles in numerous films such as 'Highlander: The Source', 'Tuesday', 'Mother Of Tears', 'Perfect Hideout', 'DJ', 'We Still Steal The Old Way' 'LUCID' and 'Guilt'.

Cristian has written and directed three feature films and the most recent, 'I Made this for You', was released last year to critical and clinical acclaim, as an important work about men’s mental health and suicide prevention.