30/40's Neutral, Upbeat/Fresh/Experienced
← back to women 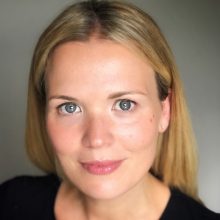 Collette Collins is a London based voice over artist.

Collette’s career started in local radio as a co-presenter on a Saturday morning breakfast show, a brief stint as a traffic and travel reporter followed which led to further presenting roles at various stations across the south east.

She then spent five years as a continuity announcer for Sky and BBC Three.

In 2013 she became the voice of sponsorship and promotions on Radio X, and in May 2018 the new station voice of BBC Radio 2. Collette has also voiced a variety of commercial campaigns including; Colgate, Herbal Essences, Proactiv, Disney and John Lewis.