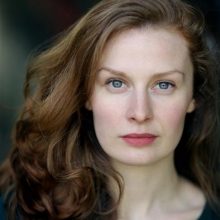 Claudia Jolly is a London based actress.

She landed her first job straight out of drama school (Guildhall School of Music & Drama, Gold Medal Winner) in 'NW', the BBC adaptation of Zadie Smith's novel of the same name. After this, she was cast as Katharine Draper in 'Girl from the North Country' at The Old Vic. The hugely successful run then transferred to the West End.

Claudia's other theatre credits include 'The Butterfly Lion' (Minerva Theatre, Chichester), Gwendolen in 'The Importance of Being Earnest' (Watermill Theatre);  Narrator in Roald Dahl Centenary Concert (LSO/Barbican); Bianca in 'Men' (Arcola Theatre/Edinburgh Fringe Festival, NSDF Acting Commendation); Rosalind in 'As You Like It' (Edinburgh Fringe Festival); Rebecca in 'The Country' and Mrs Milcote in 'Coram Boy' (Pleasance Theatre); Lily Garland in 'On the Twentieth Century', Isabella in 'Go, Make You Ready', Lulu in 'Lulu', Myriam Horowitz in 'Mephisto', Lady Macbeth in 'Macbeth', Andromache in 'The Trojan Women', Baker’s Wife in 'Into the Woods', Anne in 'Separate Tables', Lois in 'For Services Rendered', Ranevskaya in 'The Cherry Orchard' and Mary Magdalene in 'Medieval Mystery Plays' (GSMD).

Additional television, film and radio credits include 'The Feed', 'Endeavour', 'On Chesil Beach', 'The Story of a New Name', 'Those Who Leave and Those Who Stay' and 'The Story of  the Lost Child'.

Secret Life Of The Zoo