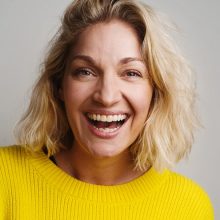 Charlie Coletta is an English actress of stage and screen based in London.

Originally from Dorset, she has appeared in 'The Increasingly Poor Decisions of Todd Margaret' and 'A Young Doctors Notebook' alongside Daniel Radcliffe and Jon Hamm.

Other recent theatre credits include 'Little Secrets' at the Stockwell Playhouse and playing the role of Lady Anne in 'FEAST' a contemporary one-act play that premiered at the Gdansk International Shakespeare Festival which is coming to London in November.

Charlie has just finished filming the role of Jemima in new comedy-drama 'Dreamland' for Merman/Sky.