30/40's Welsh, Lyrical/Emotive/Distinctive
← back to women 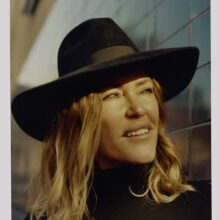 Cerys Matthews is a London based Welsh musician, broadcaster and author.

She hosts and programmes an award winning radio show on BBC 6 music every Sunday, the Blues Show on BBC Radio 2 each Monday at 9pm and co-hosts Radio 4’s new music show ‘ADD TO PLAYLIST’ with Jeffrey Boakye, which airs each Friday at 7.30pm.

Cerys founded the Good Life Experience festival with Charlie and Caroline Gladstone in 2014. She has curated and composed for theatres, including the National Theatre, London and the Tate Modern and was artistic director for the opening ceremony of the World Music Expo 2013. She was awarded an inaugural St David Award for her services to culture from the First Minister of Wales in 2014 and the same year, was awarded an MBE for her services to music.

Cerys was a founder member of multi-million selling band Catatonia and sings on the perennial winter favourite ‘Baby it's Cold Outside’ with Sir Tom Jones.

Her sing-a-long book, 'Hook, Line and Singer' published by Penguin, was a Sunday Times bestseller, and her most recent publication 'Where the Wild Cooks Go', which includes a Spotify playlist and poems, has topped the Amazon Food and Travel chart. She has two children’s books under her belt, 'Tales from the Deep' and 'Gelert'. Her album of traditional Welsh songs, ‘Tir’ is the biggest selling Welsh language album of the past ten years.

Cerys recently featured alongside Benjamin Zephaniah and Guy Garvey for the acclaimed 'The Lost Words' project. She also recorded alongside Stephen Fry and Tilda Swinton for the audio version of 'Moby Dick'. She will soon be heard on the sister project, voicing Coleridge's 'The Rime of the Ancient Mariner'.

She has narrated Dylan Thomas’s 'A Child's Christmas' to music she also composed. This version was played in its entirely on BBC Radio 4.

My Life in Verse