30/40's London, Husky/Assured/Friendly
← back to women 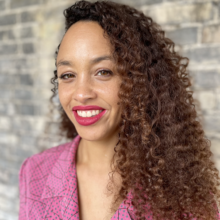 Celeste Thomas is a London based TV Presenter and Voice Over artist.

Whilst working as production manager within the commercial wing of The Walt Disney Company (Disney Media +), Celeste had the opportunity to take up roles behind the mic and in front of the camera.

Initially doing some voice over promo work, leading up to brand and media partnership commercials, and then auditioning, and being chosen, as the face of the 2015 government funded Public Health England National TV campaign in partnership with Disney, Celeste co-presented the weekly Change 4 Life 10 minute shake-up’s which ran throughout the entire Summer.

Since going freelance, Celeste has had the opportunity to open up her repertoire past the House of Mouse, so check out her reel to hear more.