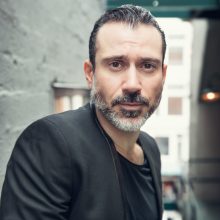 Ben Turner is a London based actor with Persian heritage.

He starred in the blockbuster epic '300: Rise of an Empire', in which he played Eva Green's right hand man General Artaphernes.

On stage, Ben has worked with some of the country's top directors including Sir Peter Hall, Michael Grandage, Michael Attenborough and David Lan. Ben is best known for taking on the epic lead role of Amir in Khaled Hosseini's best-selling novel 'The Kite Runner'.

He starred in Stephen Daldry's 'The Jungle' at the Young Vic, Playhouse Theatre and St Ann's Warehouse (New York). He most recently performed in 'My Brilliant Friend' opposite Niamh Cusack at the National Theatre in London.

Ben can currently be seen in 'The Ipcress File' (ITV/Britbox)

The Kite Runner by Khaled Hosseini