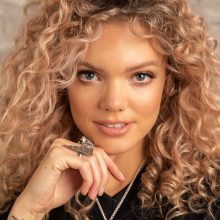 Becca Dudley is a London based TV Presenter, DJ & drummer.

You can usually find Becca dj-ing reggae, dancehall and hip-hop across London and the UK, spinning at festivals including Glastonbury, as well as supporting some of the world's biggest reggae and dancehall artists.

She graduated from The London College of Fashion with a degree in Fashion Styling and Photography. On leaving, Becca combined her passion for fashion with working as both an editor and stylist for FIASCO magazine, interviewing (amongst others) the legendary dub reggae artist Lee Scratch Perry.

In 2012, Becca was signed up as one of the new faces of MTV UK, fronting daily news and became their leading presenter. She currently hosts over 7 shows across MTV, including her very own music show 'Live Lockdown' as well as covering worldwide music events with World Stage.

Alongside TV, Becca has a passion for radio. She hosts her own show on Apple Music's international station Beats 1, and also presents her own specialist reggae and dancehall show.

Becca was the solo host for the 2020 MTV Pre-EMA show, which replaced the red carpet last year. She was the first solo female host for the UK Music Video awards in November 2020 and also hosted Sony’s Music Virtual showcase the same month.