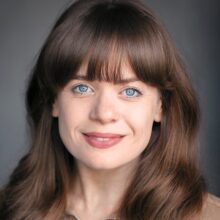 Anna Gilthorpe is a London based actor, singer, and songwriter.

Originally from Newcastle-Upon-Tyne, she trained at The Royal Academy of Music Postgraduate Musical Theatre Diploma, where she graduated with Distinction.

Her TV credits include the title role of Gemma in BBC3’s comedy series ‘The Gemma Factor’, ‘Holby City’ and ‘Doctors’ for the BBC.

Anna is the co-Founder of retro girlband the ‘Tootsie Rollers’ and award winning children’s education brand ‘Musical Dots’. She has performed all over the world, reached No 1 in the UK Jazz charts and was featured as one of Cosmopolitan Magazine’s female founders of the future.

“Anna shines in the comedy gem. The show has found an authentic star” – The Stage

“We anticipate a bright future for Anna Gilthorpe” – The Sunday Times.

The Midnight Library by Matt Haig