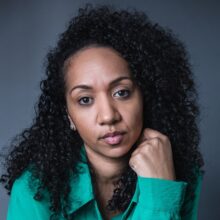 Alexandria Riley is a BAFTA-nominated actress and writer from Newport, South Wales.

With roles in ‘The Tuckers’ (BBC) and ‘In My Skin’ (BBC3) to ‘End of the F***ing World’ (Netflix) and ‘The Pembrokeshire Murders’(ITV), Alexandria has had a wide and varying career in both comedy and drama with an upcoming Apple TV show ‘Wool’, and a film for Sky Arts.


Theatre credits include 'The Cherry Orchard', 'Hedda Gabler' (Sherman Theatre), 'Mother F***er with the Hat', 'Taming of the Shrew' (Tron Theatre), 'Light is on a Timer' (RSC) amongst others.  Alexandria is also well established in radio, appearing as the regular role of 'NG ' in 'Torchwood' as well as appearances in 'Doctor Who' and many other dramas for BBC Radio Wales, Radio 2 and Radio 4.