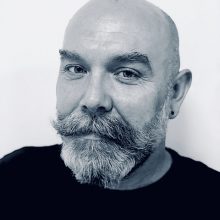 Al Doyle is a London based Irish voice-over artist and actor.

He is a talented and versatile voice actor who is popular with producers and directors the world over, and he has given voice to some of the biggest global brands.

Al enjoyed an early and varied music career, starting with his first band 4 Rhythm in 1995, topping the charts later that year with their song ‘Manic’. They toured extensively across Ireland and the UK supporting bands including the Prodigy. He set up the award winning hip hop act 3rd Eye Surfers in 2001, releasing the first ever Irish Hip Hop Album called ‘Filthy Folklore’. They supported Public Enemy, Jurassic Five and Grand Master Flash. In 2004, he joined the experimental band Decadence releasing the album ‘Loud’ later that year to critical acclaim.

He has also led a very successful TV career for 24 years working as a freelance Producer, Director and comedy writer. He has produced award winning shows and created his own 6 part comedy series called ‘Meet Your Neighbors’.

Al has had a very busy couple of years, with a string of major animation and game releases coming in 2022.

Find It, Cook It Prison

Lord of the Rings