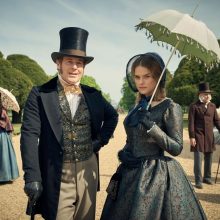 At the now legendary Duchess of Richmond’s ball on the eve of the Battle of Waterloo, young lovers Sophia Trenchard and Edmund Bellasis forge an ill-fated legacy that will create scandal for generations to come.

Some years later when Sophia’s parents, the upwardly mobile Trenchards, move to the fashionable Belgravia, they find themselves rubbing shoulders with the venerated Brockenhursts. The two families share a history that threatens the inheritance and reputation of many.

There are those who would prefer the secrets of the past to remain forgotten, but as longburied events resurface the truth behind the families’ connection becomes hard to conceal from the great and the good of British society…

The limited series reunites the award-winning creative team behind ‘Downton Abbey’; with Julian Fellowes adapting his bestselling novel for the screen.