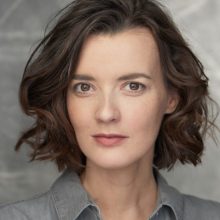 ‘Annika’, written by Perrier nominated writer Nick Walker, is based on the hugely successful Radio 4 drama and follows the sharp, witty and enigmatic DI Annika Strandhed, as she heads up a new specialist Marine Homicide Unit (MHU).

This specialist unit is tasked with investigating the unexplained, sometimes brutal, and seemingly unfathomable murders that wash up in the waterways of Scotland.

The team’s cases take them from the depths of Glasgow’s Clyde River, to the Isle of Bute and picturesque Loch Katrine as they solve a new crime each episode, juxtaposing Scotland’s stunning landscapes and urban beauty against the horrific realities of the murders her team must solve.

Watch the brilliant Kirsty Strain at Trish Hendry in ‘Annika’ on Alibi from Tuesday 17th August at 9pm.