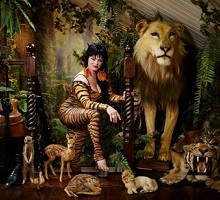 New documentary ‘All Creatures Great and Stuffed’ airs on Channel 4 this Wednesday at 10pm with the brilliant Matt Rudge at the helm.

In this program director, producer and narrator Rudge encounters some of the world’s most surprising modern examples of the craft of Taxidermy.

Taxidermy is undergoing a global revival, with high-street shops popping up, night classes selling out and demand outstripping supply. In Holland, artist Bart responded to his pet’s death by creating a radio-controlled flying cat with the help of engineer Arjen. Arkansas businessman Daniel Ross runs a specialist taxidermy service in the US where patrons can have their deceased animals freeze-dried, while in Blackburn, Nicola is opening a boutique selling creations made from roadkill, and shot-girl Jayne is turning her hand to the preservation of dead animals in Essex.

Don’t miss this fantastic insight into the world of taxidermy in what is being described as “eye popping” and “jaw dropping” tonight on Channel 4 at 10pm.

Matt is available for voice work at the moment so if you need an experienced, warm friendly voice give us a call.