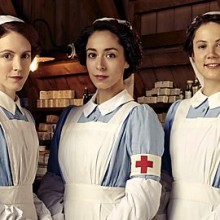 It forms part of the BBC’s First World War season, commemorating 100 years since the outbreak of the conflict and has received fantastic reviews.