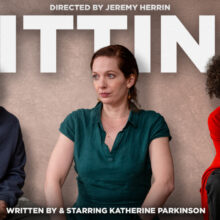 Starring Katherine for the first time, the one-off special follows three characters as they sit for a silent painter. In these sittings, Luke, Cassandra and Mary reveal truths in a play about love, loss and the importance of human connection.

Katherine made her debut as a playwright with ‘Sitting’ at the Edinburgh Festival Fringe as part of a BBC Arts and Avalon playwright’s initiative, with the play subsequently transferring to London’s Arcola Theatre.