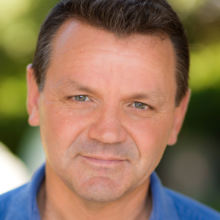 - ‘Total War: WARHAMMER II’ Is Out Now Featuring An Array Of Loud And Clear’s Fantastic Voices

Wayne Forester is a London based Welsh/RP actor and experienced voice over artist.

Wayne is a well seasoned pro on all things character!  He can do teens to OAPs from all over, as well as tackle more down to earth and serious subjects with corporate aplomb!

His most recognised VO work includes voicing the Captain in Gerry Anderson's epic series The New Captain Scarlet (CITV), Roly Mo and Rockit in The Fimbles (twice BAFTA nominated) and The Roly Mo Show (both for CBeebies), Henry's Dad in Horrid Henry, and Big Bear and Oakley in Everything's Rosie.  Other roles include Zebedee in The Magic Roundabout (Nick Jnr.), the opposing captains in The Likeaballs (CITV ./ Cosgrove Hall), Blue Meanie in The Yellow Submarine (for Walker Books Ltd.), Cheshire Cat in Alice In Wonderland, and multiple aliens in Space Precinct.

He also has very broad game-voicing experience with numerous  titles for a broad range of genres.  His technical abilities also extend to ADR/dubbing work, with deliveries for such projects as Harry Potter, The Corpse Bride and Lord of the Rings.