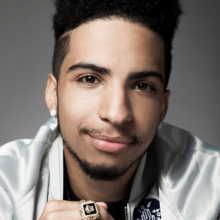 Troy is a London based magician and voice artist.

With a Jamaican mother and a German father, multiple tattoos and an eclectic sense of fashion, Troy doesn’t look like your average magician. He blends close-up magic and situational illusions, offering a new take on the art with a manner that is spontaneous and unforced. Troy inherited his adventurous streak from his archaeologist / psychologist father. It was he who took his son, at the age of six, to see local magician The Great Kovari, which is when Troy got his first taste for magic.

His passion for magic was further ignited in the late 90’s whilst watching David Blaine. Troy studied Blaine’s videos intently figuring out how to recreate the art. At the age of 13 he joined The Young Magicians Club and went on to win Young Close Up Magician of the Year in 2004. He now holds the “Gold Star Membership” of the Magic Circle.

Television came calling and the first of Troy’s eponymous series launched on Channel 4 and E4 in February 2014 with a swift re-commission for a second series the following year. The hugely successful series were sold to over 150 international TV networks and Troy’s name as one of the leading young UK broadcast magicians was cemented.

With these successful shows under his belt he then delivered Troy: Cyber Hijack for E4, a one off special combining large scale stunts and pranks. Troy: The Highwire, his most recent special for C4 / E4 saw him taking on the most daring stunt of his career to date.