20/30's Nottingham, Quirky/Ernest/Natural
← back to women 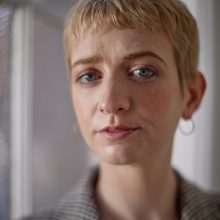 Phoebe Frances Brown is a London based actor and writer from Nottinghamshire.

She works in theatre, comedy, radio and television.

Her most recent theatre credits include ‘Small Island’ and ‘If We Were Older’ at the National Theatre. Phoebe has performed at other theatres such as New York Theatre Workshop, Donmar Warehouse, Soho Theatre, Birmingham REP, Nottingham Playhouse, Leicester Curve and has performed many times at the Edinburgh Fringe Festival. Her theatre company Major Labia are an associate company of the Nottingham Playhouse.

She played the role of Constance Pettigrew in the BBC Radio 4 series ‘Home Front’ and has recently recorded ‘The Whisperer in Darkness’ for BBC Sounds.