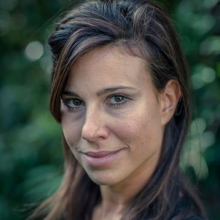 Monica Bertei is a British actress based in London.

After completing a two year course at the City Lit in London, she was awarded a scholarship to study at the Academy of Live and Recorded Arts (ALRA), graduating in 2005. Monica has secured a number of significant theatre roles since graduating from ALRA, in particular at the Traverse, Soho Theatre, and West End's Trafalgar studios as well as working alongside recognised actors such as Fraser Ayres, Jamie Kenna, Merryn Owen and Charlotte Lucas.

Monica is best known for playing the Spanish prostitute, 'Maria' in 'Amada' inspired by Isabel Allende at the Traverse and 'Thea' in Paul Sellar's 'World's End' in the West End.  She began her professional acting career in screen roles such as the feature, 'Coffee Sex You' opposite Rosie Fellner, a guest lead as the Sicilian 'Mira' in the TV series 'Doctors' as well as appearing in comedy 'Plus One' for Channel4.

Fluent in English, French, Italian and German she also has a BA Honours degree in European Studies and French.