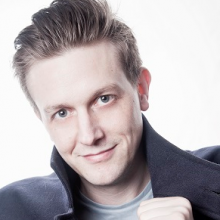 Matt Rudge is a London based BAFTA nominated, Award Winning filmmaker, writer and stand up Comedian.

He has been behind some of the most well known and popular documentaries of recent years on mainstream channels such as BBC and Channel 4, all of which he directed, filmed and narrated.

As well as making well respected and popular documentary films, Matt is much in demand as a stand up comedian on the UK comedy circuit, where he uses his vocal skills to tell comical anecdotes, adding voices and noises to his characters and stories.

Matt started doing voice over and cartoon voice overs as a teenager when he was asked by a producer who had seen him in a play, to add noises to a cartoon for King Rollo FIlms. This lead to more work on Radio Dramas on BBC Radio 4, as well as voicing a puppet for a whole series on Children's ITV. After graduating from University and studying Theatre and Literature, Matt began his career making short films as well as trying his hand on the stand up comedy circuit. Both careers flourished, and whilst Matt was the voice over for Channel 4 and E4's series Kings Of Comedy he was also being nominated for Comedian Of The Year.

Simultaneously he was also busy directing his own documentaries that he narrated, such as the Award Winning and BAFTA nominated 'The Autistic Me' (BBC), its follow up The Autistic Me: One Year On (BBC), then So What if My Baby Is Born Like Me? (BBC) Millionaire Boy Racers (C4) The House of Surrogates (BBC4) and Celeb Hunter: 2 Chairs 1 Chat (C4)

“Warm, funny and perception changing. This will win awards” The Times

“Charming, unpretentious and gently witty, Rudge’s real gift is relating with the crowd – he all but exchanged numbers with the front row”
Fest Magazine