20's Northern, Bright/Playful/Versatile
← back to women 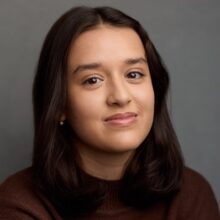 Lauren Patel is a Northern based Actor.

She landed her first professional acting job having responded to an open audition while studying for her exams.

She plays the young female lead Pritti, in the feature film 'Everybody's Talking About Jamie' which is available on Amazon Prime...."a brilliant performance from Lauren Patel as his best friend Pritti Pasha - supporting Jamie while also fighting for her dreams of becoming a doctor." - WhatsOnStage on Everybody's Talking about Jamie.

Lauren can be heard voicing PB in Aardman's brand new CGI comedy series 'Lloyd of the Flies' which is airing on CITV.

Driving School of Mum and Dad Rich Kids Of Instagram

Visual - Animation | Lloyd of the Flies