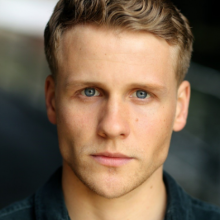 - Josh Dylan stars in the much anticipated adaptation of Malorie Blackman’s ‘Noughts + Crosses’ - Josh Dylan stars in ‘The End of the F***ing World’ on Channel 4 & Netflix - Mamma Mia! Here We Go Again with Josh Dylan as the young Bill is in cinemas now! - “Allied” Featuring Josh Dylan Is In Cinema’s On General Release From 25th Nov

Josh Dylan is a London based actor.

He is in the latest season of C4/Netflix hit series 'The End of the the F***ing World' and stars in the BBC's much anticipated adaptation of Malorie Blackman's award-winning book series 'Noughts + Crosses'.

A graduate of Guildhall School of Music and Drama, Josh appeared opposite Brad Pitt in 'Allied' directed by Robert Zemeckis. He has also featured opposite Ruth Wilson and Domhnall Gleeson in 'The Little Stranger' directed by Oscar nominated Lenny Abrahamson and as young Bill in 'Mama Mia! Here We go Again'.

Josh's theatre work includes 'Sheppey' at the Orange Tree Theatre where he won the OFFIE award for Best Supporting Actor.