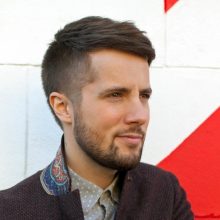 Jonny Nelson is a London based Northern TV presenter and voice over artist.

His quick-wit and humour have helped catapult his career with impressive speed, presenting in front of millions on a weekly basis, both nationally and world-wide.

Having cut his comedic teeth in stand up, live radio and every obscure local event you can fathom, Jonny developed a panache for adapting quickly and hilariously to any situation.

These dexterous talents soon led to him becoming a firm favourite on the red carpet, and established him as one of the UK’s leading showbiz journalists. Whether he’s disarming Hollywood directors with his impressive Film & TV knowledge, soliciting laughs from comedy greats such as Will Ferrell and Ricky Gervais, or even achieving the near impossible of cracking a smile from Robert De Niro, Jonny has been quick to establish himself as the go-to-guy for bold and entertaining celebrity interviews to remember.

Backed by a degree in broadcast journalism, it is the combination of his comedic sensibilities and natural charisma that led to him being picked up in 2016 by Premier League TV, joining the Kick Off presenting team to report live to tens of millions worldwide. With this sports background and an ability to inject a healthy dose of ‘funny’ into any genre, it was not long before Jonny’s presenting talents were utilised to front online content for digital colossal Give Me Sport, and Nickelodeon’s hugely popular show Nick Kicks.

Fast forward to 2018 and Jonny’s career has reached impressive heights. Not only has his digital reach continued to propel as one of the lead presenters of GOAL’s hugely popular Studs Up show, but he was chosen to front BBC2 and CBBC’s highly anticipated live Saturday morning children’s show, Saturday Mash-Up, alongside Yasmin Evans.

Jonny will soon be found presenting The Football Show to a worldwide audience, taking a colourful look behind the beautiful game with Layla Anna-Lee.