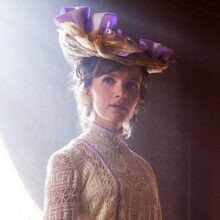 ‘Angel of Darkness’ the sequel to ‘The Alienist’, promises to be an unflinching, gripping, turn-of-the-century murder mystery that spotlights both New York’s wealthy elite and the struggling underbelly of the city’s Gilded Age.

Sara has opened her own private detective agency and is leading the charge on a brand-new case. She reunites with Dr. Kreizler, the formidable alienist, and John Moore, now a New York Times reporter, to find Ana Linares, the kidnapped infant daughter of the Spanish Consular.

Their investigation leads them down a sinister path of murder and deceit, heading towards a dangerous and elusive killer…

Don’t miss the superb ‘scene-stealing’ Emily Barber, Michael McElhatton and Charlotte Hamblin, in ‘The Alienist: Angel of Darkness’ from 22nd October on Netflix.